Silver City and environs currently use 740 million gallons of water each year, with June consistently the month of greatest demand. This June, 96 million gallons of water were pumped to Silver City water users. Usage drops off in July and August with the onset of Monsoon rains, when less outdoor watering is needed and cooler afternoon temperatures reduce the use of the ubiquitous "swamp" cooler.

Since 1995, the highest water production occurred in 2000, when more than 992 million gallons were pumped. According to a 2017 supplement to the Town’s 40-year water plan, groundwater diversions have grown from about 500 acre feet per year in the 1950’s to an average of about 2,400 acre feet per year since year 2010. Silver City is allowed to divert up to 4,567 acre feet per year, and has an additional permit for another 940 acre feet from a wellfield near the Grant County Airport, which is slated for development as part of Phase 1 of a regional water plan. The New Mexico Office of the State Engineer determines how many acre feet may be drawn.

Current projections show a municipal water supply capable of supplying water for the next 100 years, using the current growth rate of 0.5% annually, which has held for the past decade. However, other factors such as continued drought and climate change predictions for a hotter and drier climate over time will continue to pressure the Mimbres Basin, where water levels have dropped significantly - more than two million acre feet - since the early 1900s.

Extending the Life of the Aquifer

Town management has turned to conservation in an effort to extend the life of the aquifer. In 2010, Town Manager Alex Brown became concerned when the total water being pumped reached 60% of capacity. He realized that the easiest, most cost-effective method for reducing water demand was through water conservation.

I realized that we had to do something, he said. New water infrastructure to increase capacity is expensive, and that only puts more pressure on the aquifer. Conservation is much more than a feel good activity. It’s a vitally important component for maintaining our water supply over time.

A community input and planning process was initiated and a water conservation plan was adopted in 2013, updating a 1996 plan. Various conservation measures were recommended, several of which have been implemented, including the installation of "smart" irrigation at the Ben Altamirano sports fields in 2013, the highest water user at that time, gulping nearly 20 million gallons of water in 2012, more than 2% of total annual water usage. Smart irrigation has saved the town more than 24 acre-feet of water annually, according to town records. However, Silver Consolidated Schools reportedly no longer uses the smart irrigation system, and calls for information as to why that is were not returned.

Treated wastewater is now used to water the Scott Park Golf Course, saving an additional 460 acre feet per year. A recent hydrology study found that this effluent ultimately filters through the earth, helping to recharge the aquifer. As a result, the town applied to the state for recharge credits, which were approved, allowing for the development of the town’s water rights at the airport wellfield. 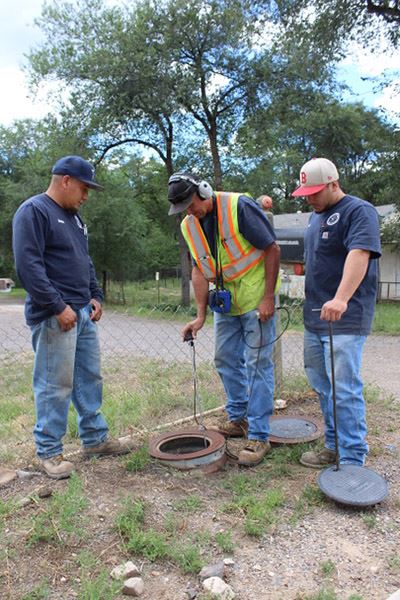 Unaccounted for water losses spurred installation of new "smart" water meters in 2016, resulting in faster, more accurate leak detection and measurement of total water usage, explained Robert Esqueda, Silver City Utilities Department director. Not only does this help save water, but it also saves wear and tear on our pumping system," he said. We’re no longer paying to process water through the system, only for it to be lost to leakage. Now we can easily flag anything that is out of the normal range of usage, and so can the consumer. It also results in more accurate billing.

Smart meters measure water usage every five minutes, and a graph of usage is easily printed for consumers who have questions when their water bill inexplicably increases, often due to a leak. Smart meters are read much more quickly, freeing utility department staff to focus on leak detection, using sonic-wave technology leak detection equipment purchased late last year. To date, 1,259 hydrants, valves and meters have been tested, and 16 leaks discovered and repaired.

Accurate billing is key for consumers, given that water rates rise in accordance with overall usage. This tiered fee structure is designed to encourage household and commercial water conservation, said Brown, who is charged with the difficult responsibility of helping guide regional water planning and conservation efforts.

We want to be fair to consumers, but we all need to be good stewards of the water system, he said. It’s important for everyone to do their part to help conserve as much water as possible. If we don’t, it will cost us all more over time.